As part of a Low-Income Housing Tax Credit financing effort, the project included: 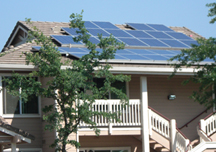 By far the largest improvement was the installation of a 475-kilowatt roof-mounted photovoltaic panel system throughout the complex. "We had done a few other projects with solar installations," said USA Properties Project Manager Santiago del Rio, "but not to this scale." The solar panels provide approximately 83% of the energy required for each rental unit as well as 90% of the energy required for the common areas including the clubhouse.

According to Wade Hughes, manager of SMUD's SolarSmart program, virtual net metering takes advantage of great economies of scale. Under a traditional net metering system, each unit would require its own solar panel and its own inverter, as well as an additional meter.

Such a configuration would not have been possible at Vintage Oaks because "there's not enough space on the side of the building," said Hughes. Instead, virtual net metering allows for solar generation without requiring the generator to be physically connected to each billing meter.

Without such a configuration, SMUD could not deliver the benefits of solar energy to a population that has been largely under-served, the low- and very low-income seniors. Hughes said the average tenant's electric bill has been reduced from $26 to just $7 dollars a month.

The Vintage Oaks project received recognition and an award from the publication, State and Local Energy Report.